Hello, I’m Hannah, and I’m Scottish.  When you think of traditional Scottish meals, vegan doesn’t really come to mind, does it?  After a recent trip home to the motherland, I dove straight into trying to prefect making some of my favourite meals from childhood, VEGAN.  This is a classic mince and tatties, with lovely stodgey doughballs.  Doughballs are a kind of dumpling – but in my house they are doughballs.  Also, just for clarification, tatties, are potatoes!

I served mine with traditional neeps and tatties, so turnip and potato.  This recipe serves 4, or 2-3 very hungry Scots!

How to make the Neeps and Tatties: 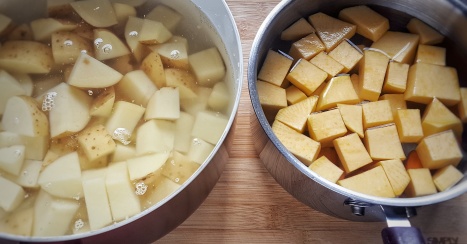 This part is pretty simple.  Boil separately  in salted water until soft and mashable.  Drain and mash when ready.  If you aren’t a fan of potato skins in your mash, just peel them before you cook them – but I like it rustic.  I also added a dollop of vegan butter to the mashed potatoes to make them creamier.  As for the mashed turnip, it had quite a wet consistency, so I think butter would just ruin it.

How to make the Mince:

First you’ll want to prepare your soya mince.  You could just use a frozen mince substitute, like the quorn vegan mince for example, but I like how you can flavour this soya mince however you like.  The soya mince needs soaked, so I soak 1 cup in water with about a tsbp vegan bouillon for 10 mins.  While the mince soaks, water-fry (or oil-fry, if you like) the onion, garlic and carrot until the onions are translucent.

Once the mince is soaked, drain and squeeze out any excess water.  Then add to the onion, garlic and carrot in the pan, along with with 1 tbsp worcester sauce and 1 tsp mixed herbs and mix well.

Add 3/4 cup water and 2tbsp vegan gravy granules to the mince.  Then realise it’s a very sad shade of beige and add 1tbsp tamari and a generous helping of black pepper.  Turn down to a low heat and cover while you deal with the doughballs.

How to make the doughballs:

So you can definitely do this part by hand, but I’m lazy so I did it in my food processor.  Simply add 2/3 cup self raising flour and 1/3 cup vegetable suet to the food processor and blend until all a kind of crumb, then transfer into a big bowl with the thyme and marjoram.

Mix in the water and knead until it forms a dough.  Then divide up into 8 equal doughballs.

Drop the doughballs into the pan, return to a medium heat and cover.  This was quite a shallow pan so I cooked the doughballs for 5 mins on each side.

That’s it!  Serve with the mashed neeps and tatties.  This recipe is supposed to serve 2 doughballs per person, but you aren’t going to be able to not have at least three.  I was actually quite surprised how easy it was to get something that tasted just like the ground animal flesh version, and cheap too!  It’s €4.25 for 300g of this organic European soya mince, and we are only using 1/4 of the pack for 4 people (€0.35 per person). The rest of the pack can keep for months once opened.  Whereas organic irish beef mince is €4.00 for 400g, which it suggests serves 3 (€1.33 per person).  It does have the hidden cost of taking at least one life also, so you can do the maths on which is the better choice.

I do hope you give this one a go, you don’t even have to add doughballs if you don’t feel like extra faff.  You can also serve the mince with whatever you’d like, greens, more carrots; I was just looking for a big comfort food meal that reminded me of home after being home in July.  Hope you enjoy!

Let me know if you try this recipe by commenting down below and tagging me on Instagram!  If you have any suggestions on ways you improved this recipe or your own little additions, please share!  Also feel free to share/pin this recipe on Pinterest!

This site uses Akismet to reduce spam. Learn how your comment data is processed.